A Short Guide To The British Pub Culture

Pubs, bars, and similar places play a huge role in our society; they serve as a prominent medium for people to interact and treat themselves once in a while.

The interesting part is, like everything else, British pubs have a history to them. Having a special place in the culture and heritage of the country, the English pubs have also made a prominent place in the poetry and literature of our country.

The common questions easily arise – where did this culture originate? What makes it so special? What is this culture, and what is it made from?

To answer these questions, the experts at Mosaic Board Printers have created this British pub culture guide for your assistance. Let’s take a look!

British Pubs are knowingly popular, but not many realise the years that have passed since they came into existence. They’re old, nowhere near a modern creation because they have been around for centuries, just in different names and appearances.

The first-ever pubs were known as taberna – a kind that started to develop along with the construction of the Roman streets.

That brings us to the famous ale – let’s not forget that it is a native British drink that flourished after the Romans left and the Anglo-Saxons started to build alehouses. These houses quickly spread and became a place to not only drink but interact, perhaps a place to gossip and more.

However, the modern pubs that we know today started in the 19th century with the establishment of the Beerhouse Act of 1830, which enabled pubs to be purpose-built with unique architecture and stand out from regular buildings and structures.

Types of Pubs and Architecture 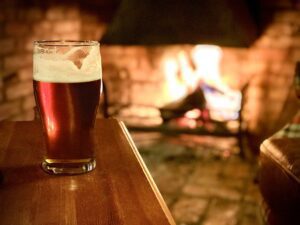 Back in the day, most pubs were indistinguishable from domestic architecture as they were simply converted into business places from the home of a landlord. Today we have distinguishable pubs based on different types, a chain of pubs, and architectural styles – both ancient and modern.

To assist you a little more, here are a few finest examples of British pubs interiors and exteriors.

Princess Louise – An ancient yet magnificent pub built in between the late Victorian and early Edwardian period, dominated by an 1891 Victorian interior design.

Eastbrook Dagenham – one of the most unique pubs built between the two world wars in 1937. It was based on the concept of ‘fewer but better.’ The architecture, however, was a Neo-Classical style.

Blakes of Hollow – this one’s design is based on geographical location, Northern Ireland is responsible for a classic and familiar wooden layout that is perfectly preserved.

Conversion Into Place to Socialise 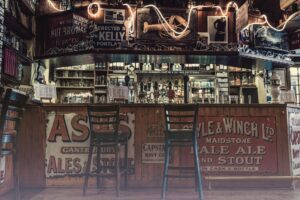 The popularity spread like wildfire, so much so that many pubs in Britain have their own sports team too!

The old pubs acted like a medium where people could gather; the local communities solved problems together. Similar to this tradition, the modern-day pub has also become a place to socialise – it’s a place where locals meet their friends and simply rejoice!

The most important and interesting part of this British pub culture guide is that it serves as an equal platform for all kinds of people; it is perfectly normal for strangers to talk to one another. A random conversation about sports, families or even politics is a good ice breaker, a place where customers stand and sit around the bar counter.

Get in Touch With Mosaic Board Printers for Customised Beer Mats

Running a pub business is a rewarding experience, only if you have proper ways to make the operations efficient. With this business comes many responsibilities, but brings prominent rewards if done right!

That’s where Mosaic Board Printers step in, and we’re here to fulfil all your customised beer mat needs.

We can customise and print your brand, perhaps a website address that leads to the history of pub culture, to intrigue your customers and keep them coming for more such insights!

Get in touch with us today!